Iftar with a Spanish flavour

Ramadan is almost over, but while the hour of sunset varies world wide and dictates when you can break your fast, it is one of the most important moments that unite Muslims worldwide. 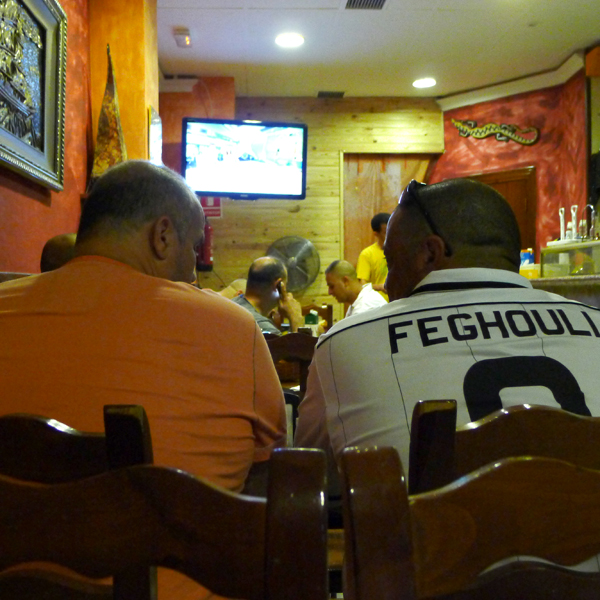 When I enter the restaurant at nine in the evening I’m the first to arrive, so I stand at the bar chatting to brothers Oumelaz and Redouane. We are in darkness, other than the the flicker of light from a football match on the wide-screen television, a sport that leaves me cold, although I enjoy it more than I usually would because the commentator is getting very excited in Arabic and the text scroll along the bottom of the screen means absolutely nothing to me.

At four placings on each of the six tables is a saucer with a few dates, a hard-boiled egg, and chabakia, the traditional Ramadan sweetmeat that gives a sugar boost after a long day of fasting, made worse this year by the long summer days and higher than usual temperatures.

At 9.05 the first customers walk in, three young men built like the gym is their home-from-home. The lights are switched on and business begins.

By 9.07 the small restaurant is full, mainly with men, apart from one table where the poor mother is struggling to keep her bouncy daughter still. The brothers serve each client msamen amer, a pan-fried pancake filled with red pepper, onion and tomatoe – pizza maroqui, as Redouane laughingly calls it. Everyone chats amiably, waiting for three more minutes to pass before they can begin their evening meal, just before which, a bowl of spicy harira soup is served.

At 9.10 the football is switched over to prayers from Mecca and everyone begins to eat. Despite the amount of time I’ve spent in Morocco, this is my first iftar, the Ramadan evening meal, and I’m not spending it in Marrakech, or Fez, or a small village in the High Atlas, I’m in Bar Capricho II on Calle Sueca, just around the corner from my flat in the Valencian barrio of Ruzafa.

Ruzafa has been a working-class barrio of immigrants before the word was even invented;  the name comes from Arabic, so it’s not surprising we have a large Moroccan population. Even though I buy my merguez, couscous and preserved lemons from a Moroccan-owned shop, go to a very basic caff for a cup of mint-tea, chat occasionally with friends at the local Magreb Association, and pass the Arabic bookshop on my way to the park, it never actually occurred to me that the cafes would work to a Ramadan schedule. At least until last night it didn’t, when I wandered past Capricho II. 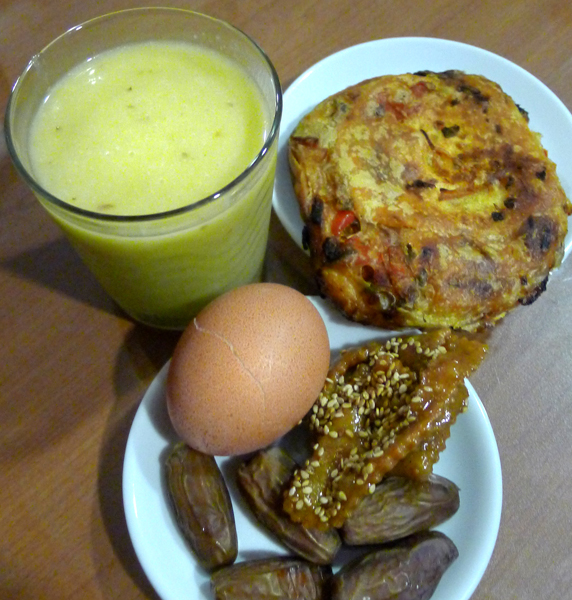 So that’s why I’m here, sharing a table with chatty Mostapha and smiling but silent Hamid. As I finish off my boiled egg, bowl of harira, msamen, Mostapha points to the TV screen and complains how expensive it is to make Haj, the trip to Mecca that all Muslims aspire to, how expensive it is to live in London, at least according to his brother who lives there, and how very happy he is to have a foreigner share his table at such a special time in the Muslim calendar. Over the meatballs and chicken kebabs, he tells me that it’s not surprising to see the English sub-titles with the commentary and readings from the Koran on television because in many Arab countries English is the second language, and many Muslims born and bred in English-speaking countries don’t speak Arabic.

As I drink my mint tea, Mostapha thanks me for the conversation, wishes me goodnight and leaves. I finish my tea and do the same, thanking Oumelaz and Redouane for allowing me to share their Ramadan meal. As I walk home I think how much I’ve enjoyed the experience, but feel extremely grateful that I don’t have to be up at four in the morning to have breakfast.