Marrakech treaty opens up world of books to blind people 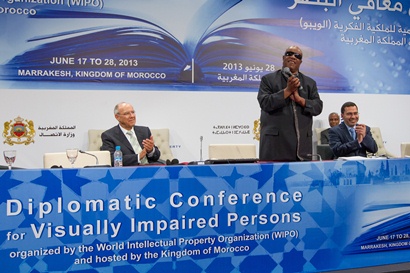 According to the World Health Organization (WHO), there are more than 314 million blind and visually impaired persons in the world, 90 per cent of whom live in developing countries. The World Blind Union estimates that of the million or so books published worldwide every year, less than five per cent are made available in formats accessible to visually impaired persons. A historic treaty signed in Marrakesh last Friday is expected to boost hundreds of millions of blind or visually impaired people’s access to books.

Laboriously named the ‘Marrakesh Treaty to Facilitate Access to Published Works for Persons who are Blind, Visually Impaired, or otherwise Print Disabled’ allows the waiver of copyright restrictions in order for books to be available in formats such as Braille, large print text and audio books.

After more than a week of intense debate, the 800 delegates from the World  Intellectual Property Organisation (WIPO)’s 186 member countries reached a  compromise, primarily on limiting copyright restrictions.

“This treaty… allows people to be able to borrow or get access to books produced in an alternate format in one country and share it with persons in another country. This is a really important thing,” said Maryanne Diamond, president of the World Blind Union, adding, “It’s been a very long battle.”

Jace Nair, head of the South African National Council for the Blind, emphasised the impact it would have in Africa with its disproportionately large blind population. “In Africa, we’ll be in a better position to get a greater access to information and knowledge… (which) is going to improve the quality of our education, improve access to education, access to health services and active  participation in civic life.” Securing the treaty was “a very emotional moment,” he added.

Blind music legend Stevie Wonder was in Marrakesh for the celebrations, calling the treaty, which comes after years of negotiations and resistance from rights holders, “a new beginning”.

No stranger to international negotiations, Marrakech was where the World Trade Organisation was established almost two decades ago.