The Gardens of Marrakech 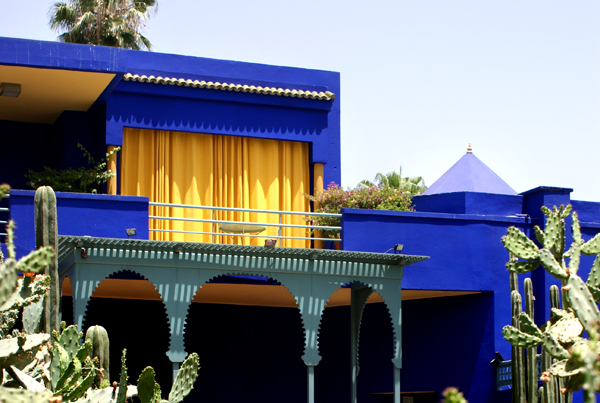 For millennia the garden has always been an important element of Moroccan life; the word ‘riad’, the name given to the traditional home with its enclosed courtyard of tinkling fountain, orange and olive trees, is simply a modern of version of the word ‘ryad’, which translates from Arabic as ‘garden’.

During the Moorish conquest of Spain, where they gave the name of Al-Andalus to the Iberian Peninsula, they took their knowledge of mathematics, arts and sciences with them, as well as they’re skills in agriculture and irrigation. The Moors created glorious gardens, the most famous of which is the Alhambra in Granada, although examples can be seen all over Spain. And always there would be the three basic elements of a traditional garden; the olive tree to provide fruit and oil, the orange for its aroma and culinary properties (never eaten as a fruit as it was too bitter, although this bitterness was made to good use in creating the British breakfast standby of marmalade), and water to irrigate the land, for cleansing before prayer, and for its musical tones.

The Gardens of Marrakech tour takes you to the most delightful gardens of this Imperial City, an eye-opener for many people who imagine Morocco to be nothing more than Atlas mountain peaks and Saharan desert. 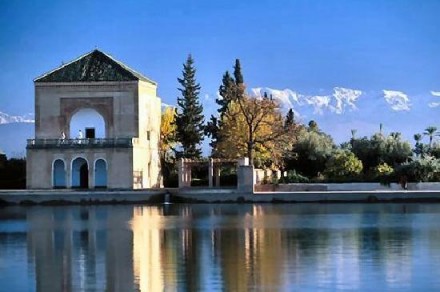 In the 12th century the Menara Garden was created by the Almohad ruler Abd al-Mu’min as an orchard of palm, olive and fruit trees, which, along with pavilions, were the primary components of Islamic gardens. A formal pool is overlooked by a minzah, a pavilion once used by the sultan and his family. The pavilion that delights the eye these days dates from the 19th century, but it is thought that a pavilion from the 16th century Saadian period was located on the site. Look closely and you will see carp leisurely swimming in the pool. 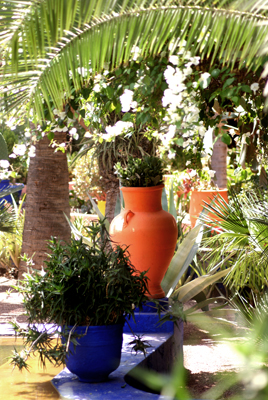 Just south of the tumultuous Medina, the Agdal Gardens, with their two enormous irrigation pools, are where Marrakshis take an evening stroll to escape the heat of the narrow alleyways of the souk. This enormous garden of 990 acres was planted by the Almoravid dynasty with olive, lemon, orange, apricot, pomegranate and cypress trees and delightful flower paths.

Considered the gem of Marrakshi gardens, the Jardin Majorelle was designed by landscape painter Jacques Majorelle, who dedicated his life to creating an exquisite collection of cacti, palms and bamboo from around the world, as well as many species indigenous to Morocco. The famously vibrant ‘Majorelle Blue’ forms a backdrop to this elegant display. When the garden fell into disrepair after the death of Majorelle, designer Yves Saint Laurent and his partner, Pierre Bergé, bought the garden in 1980 to save it from rapacious property developers and restored it to its former glory.

For further information about the Gardens of Marrakech tour, please contact Abdellatif Benhrima, Our Man In Morocco. Email: bkabdou@yahoo.fr, Tel: +212 (0)661 20 31 17