When the camel trains of up to twelve thousand animals undertook the arduous journey across the Sahara Desert from Timbuktu to the trading post of Marrakech they carried with them three highly prized commodities; gold, slaves and spices, each to be sold in their allotted market behind the rose red walls of the Medina.

Arab traders brought cinnamon, ginger, paprika, saffron, cumin, and turmeric, still the basis of Moroccan cuisine, along with dried fruits and bread making. They enhanced the traditional Berber a style of one-pot cooking that blended local ingredients such as oranges and lemons from Fez, saffron from Tiliouine, the southern provinces provided figs, dates, almonds and the curiously nutty argan oil, while mint and olives came from Meknes, where the city of Volubulis, the most southern expansion of the Roman Empire, overlooked vast olive groves, planted to supply the insatiable appetite of the empire for high quality fruit and oil. Cooked with lamb, poultry or pigeon, these layered ingredients enhanced the flavour of the traditional dishes of these nomadic tribes.

While Arab cuisine, with its love of sweet-and-sour cooking learned from the Persians, may have had a major influence on what we now know as Moroccan gastronomy, the flavours of other conquistadors added to the bubbling stock-pot of North African fare; the Ottoman Empire introduced barbeque, mainly in the form of kebabs; the preserving techniques of the Jewish population bequeathed preserved lemons, without which there would be no sublime poulet au citron; returning Moors expelled from Spain by King Ferdinand (in 1492, the same year as Columbus sailed the ocean blue), introduced the decadence of the pastilla, a heavenly filo pastry parcel of pigeon and almonds; the short-lived French Protectorate of the twentieth century brought café society, patisseries and wine, while the British brought with them the glue that cements the whole of Moroccan culture – tea – although the locals adapted it to their own tastes by forgoing milk and using mint and other herbs instead. With experimentation and elaboration in the kitchens of the four Imperial Cities – Fez, Rabat, Meknes and Marrakech – Moroccan cuisine as we know it today was born, although a new breed of chef has added a sophistication unknown a decade or so ago.

A Moroccan meal is a very communal affair, often beginning with a variety of salads, both cooked and uncooked. Unlike the orderly laid out rings of sliced vegetables found on a European plate, a cold Moroccan salad is usually served in a bowl with finely diced cucumber, green pepper, onions and tomatoe, liberally sprinkled with olive oil and chopped coriander. Warm salads, really a side dish in their own right, might include zaalouk, made with aubergines, tomatoes, garlic olive oil and spices, chakchouka, eggs poached in a sauce of tomatoes, chili peppers, and onions, often spiced with cumin, or bakoula, mallow leaves (a type of spinach) chopped and steamed, then sauteed with olive oil, spices, olives and preserved lemons. Warm salads are usually eaten as a dip with chunks of Moroccan bread.

Instead of salads the meal might begin with bissara, a rich, pale green soup of broad beans, garlic and olive oil, or harira, a flavoursome tomatoe and beef flavoured soup that traditionally breaks the fast during Ramadan

The main course might well be a tajine, which, like the iconic rice dish of Spain that takes its name from the flat metal pan in which it is cooked, is called after the clay dish with a conical top that allows the steam to rise, condense and drip back down to the stew. There are almost no limits of what can go into a tajine; meat or fish, often flavoured with dried fruit and nuts such as prunes, apricots, and almonds, and carefully guarded mixes of spices. Its leisurely cooking makes sure that the flavours combine to produce a rich but subtle dish, shared by the family from the same pot, scooped up with the inevitable chunks of bread.

Another favourite is couscous, with a base of semolina (granules of durum wheat) over which a stew is spooned. Traditionally served on Fridays with a stew comprised of seven vegetables. And curiously, given their supposed gourmand appetites, the third favourite meal of the French people.

Cakes and pastries, such as kaab el ghzal (gazelle’s horns), a pastry stuffed with almond paste and topped with sugar, are popular in Morocco, often flavoured with rose water or orange water, honey and cinnamon, although most families will finish their meal with fresh fruit and a glass of mint tea. 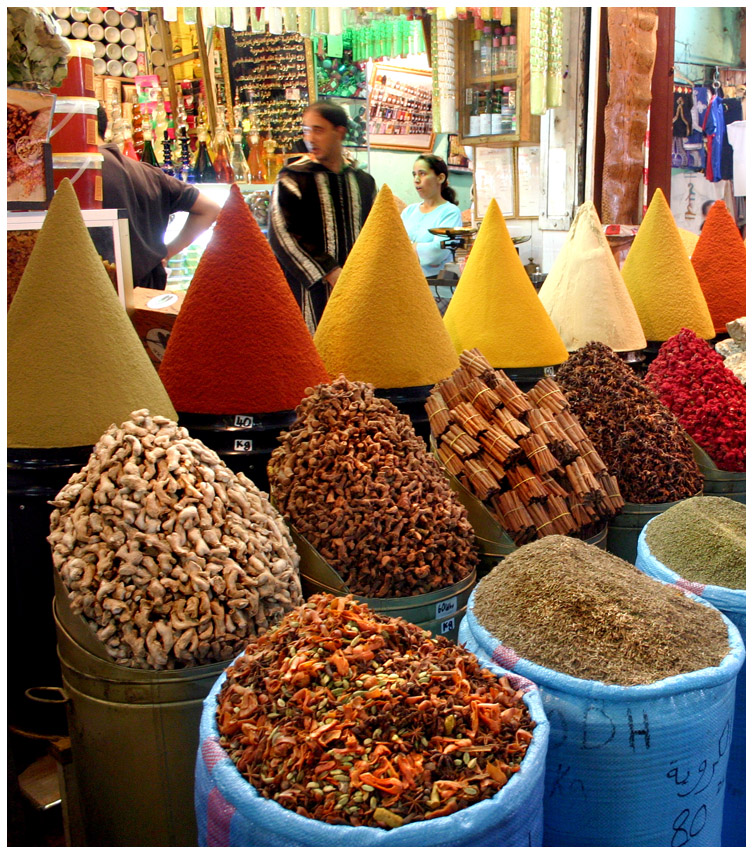 Ginger (skingbir)
Spicy and fragrant ground ginger, derived from ginger root, is used extensively in Moroccan tagines, stews and soups. It comes from the same family as turmeric and cardamom.

Pepper (libzar)
Both black and white pepper are the dried berries of the piper nigrum plant, but in the case of white pepper only the kernel is used. Black pepper has the more pungent flavour and is used widely in Moroccan cooking. Sweeter Moroccan sauces using onions and saffron would usually use the white variety.

Coarse Salt
Almost all Moroccan cooking uses course salt, the finer version being served at table.
One of the major products exchanged for the spices, gold and slaves brought to Marrakech, salt is still produced in the same salt pans at Ouirgane in the High Atlas as it was over a thousand years ago.

Cumin (kamoun)
Possibly the most important seasoning in Moroccan cuisine, aromatic cumin adds a faintly bitter note. It is found served at every Moroccan table along with salt and pepper. 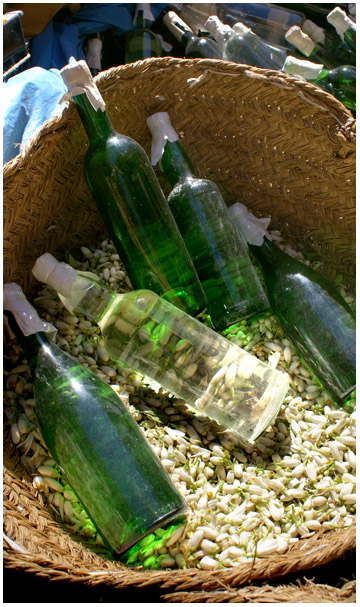 Made from dried bell pepper, paprika is excellent with eggs, meat, fish, potatoes and sauces, and its bright red colour makes a pleasing garnish. Sweet or hot, it is used in many dishes, the latter variety obviously adding a more spicy flavour.

Cinnamon (karfa)
Most commonly used in pastries and sweeter dishes, cinnamon in either bark or ground form can also add an aromatic touch to dishes with chicken, lamb or rice. It is also used in harira, the rich tomatoe-based soup that forms an integral part of the evening meal during Ramadan.

Coriander (kasbour)
Coriander in both seed and powder form is a mild spice with hints of sage. It works well in marinades.

Saffron Threads (zaafrane beldi)
The world’s most expensive spice by weight is fortunately quite a bit cheaper in Morocco than almost anywhere else. Made from the cultivated stigmas from the saffron crocus flower, only a few threads will add a distinctive, slightly bitter flavour as well as a delicate yellow colour to the dish.

Turmeric (kharkoum),
Often used instead of saffron to provide a yellow colouring to rice and other dishes, turmeric has a warm, earthy flavour and can be combined quite well with fish and sauces. It is an ingredient in mustard and curry powder.

Ras El Hanout
Translated from Arabic, Ras el Hanout means ‘head of the shop’, which is meant to imply that it is a mixture of the best on offer by a particular person or shop, who will work to his own particular blend. It is said to contain up to forty spices, (called lamrozzia), but the most common will usually include cinnamon, cumin, cardamom, ground chili peppers, coriander, paprika, peppercorn, fenugreek, clove, turmeric, nutmeg, anise, mace, ginger, various peppers, and turmeric, creating a slightly hotter blend.

Parsley and cilantro (maadnous and qsbour) are the most commonly used herbs in Moroccan cuisine and will be found in almost every dish. They will almost always be bought together in Moroccan souks.

The tangy flavour of preserved lemons add piquancy to a number of Moroccan dishes. Not always as readily available as most of the herbs and spices needed for Moroccan cooking, they are very easy to prepare.

The liquorice savour of anise, sweet and spice tang of nutmeg, and nutty taste of sesame seeds are found mainly in baking, enhanced by the essence of rose and orange blossom water.

And, of course, mint (liqama), prepared with Chinese gunpowder tea to create the emblematic drink of Moroccan hospitality, mint tea, or, as it is sometimes jokingly referred to, ‘Moroccan Whiskey’.