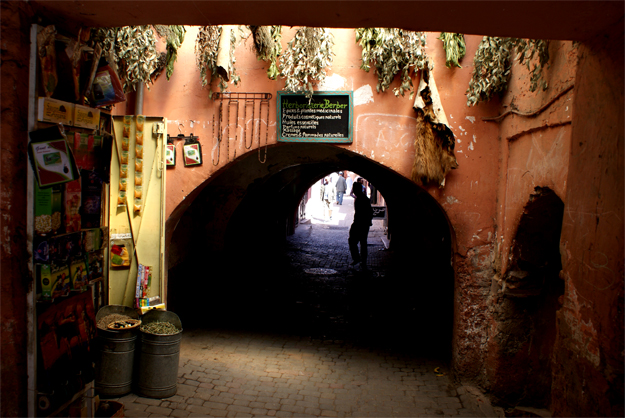 Everyone’s first experience of the souks of Marrakech is magical; the glitter of light from pierced metal lamps, row upon row of soft, lusciously coloured leather babouche slippers, richly embroidered djellabas, glowing displays of inlaid cedar boxes, conical piles of spices – an Aladdin’s cave of the exotic and unusual. But step a little further into the warren of higgledy-piggledy alleyways and you find tiny workshops, many no bigger than your wardrobe at home, that supply the shops of the souks with their beautiful hand-made merchandise; a few minutes further and you enter everyday life of the Medina, where each quartier is built around the five most important elements of Moroccan life – the bakery, the mosque, the hammam, the school and the food market. Life goes on much as it has for a thousand years, but while the workings of Medina life may be lived out in public view, its stories and secrets need un-picking and unravelling, like an ancient ball of knotted string. 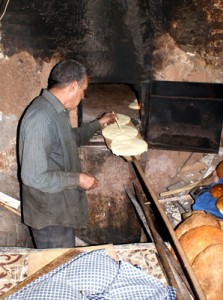 Abdellatif Benhrima is a child of the Medina, and spent his early years wandering the maze of arms-width streets, getting to know not just the stories and hidden passageways, but the traders, the craftsmen, the buyers and sellers of goods and promises. The locksmith who made perfect replicas of the ornate locks that would have secured the homes of the vastly wealthy of the Kasbah, who passed his ancient skills to his son, and who is now doing the same to his own; the dealers in animal hides, who each day take their skins to be auctioned to the makers of bags, belts and slippers; the maker of leather footballs whose wife was the only Moroccan woman ever to hand-sew footballs, and whose son in now the last of the artisans still plying his trade in Morocco; the bakers whose medieval ovens bring neighbours together to chat, exchange gossip, and, if there is spring in the air, act as marriage brokers.

Would you know how to find the only souk in the Medina that is run by women, where slaves brought across the High Atlas Mountains from Timbuktu would be auctioned? Why a foundouk has a connection to the ancient English inns? Why you will never be able to see directly into a Moroccan home, but need to be enticed into its private inner heart? Now is your chance to find out.

Secret Medina shows you life as it is lived beyond the public gaze and includes stories of the historic, the commercial and the daily life within the rose-red walls of the ancient city. 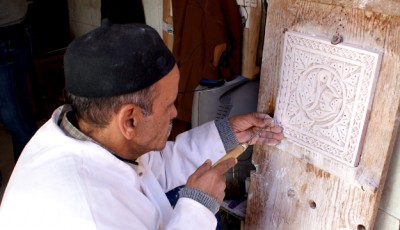 Photo & Film Shoots
As featured on ITV's Wish You Were Here…? Now and Then